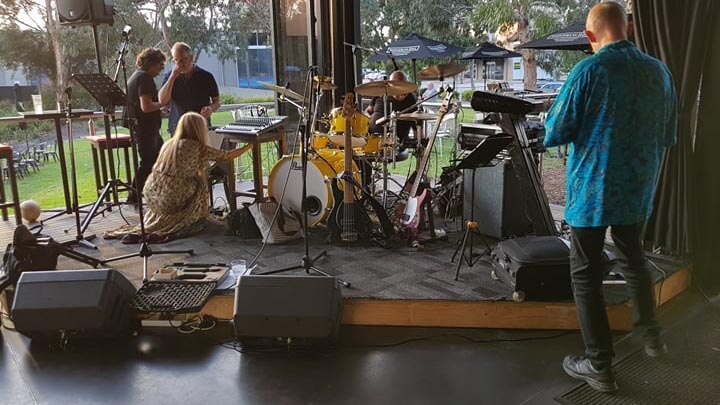 Join Us Every Sunday Morning At 10am. Live & Exclusive 20 Minute Livestream Interviews With Great Musicians. This Weeks Guest: Paul Norton

One of my favorite Australian singer / songwriters - Mr Paul Norton joins me this Sunday at 10am for a chat about the past, present & future... And an amazing career that has touched so many parts of the music industry.

Paul started playing bass in various bands in his teens, which led to the formation of Melbourne band The Runners. After a couple of years of constant live work The Runners were signed to Mushroom records in 1981 and released their first single Sure Fire Thing in 1982, followed by The album Hitting the Wall and the single Endlessly.

Paul spent the next couple of years playing with various bands (Wendy and the Rocketts, Steve Hoy and the Hoy Boys) before launching a solo career in 1988. Again signed to Mushroom Records Paul released his first single Stuck On You which received immediate airplay and got to number two on the Australian charts. Paul then went to London to work with producers Paul Muggleton and Mike Paxman on the next single, and the album Under a Southern Sky (the song Southern Sky was later chosen for Australia Day Celebrations at the 2000 Olympics in Sydney).

In 1994 Paul met Peter Wells RIP (Rose Tattoo) and Cletis Carr and together they formed Hillbilly Moon and later that year released the album Hillbilly Moon Volume One with the song She Left Me receiving solid airplay on Country Music Television.

2006 saw Paul tour Australia with The Countdown Spectacular, featuring 27 of Australia's top rock acts of the 70's and 80's performing to 100,000 people nationwide.

Paul is the Musical Director for The Australian Shakespeare Company and wrote the score for their productions of Much Ado About Nothing, Jungle Book (the Concert Show) Romeo and Juliet, Midsummer Night's Dream, Hamlet, As You Like It, Macbeth, Twelfth Night The Dream Fairies (Melbourne, Sydney and London) Pygmalion and Alice in Wonderland and independant productions of Barassi the Stage Show, Cruisin Paradise, and songs for the critically acclaimed comedy Certified Male.

What a career - Lets see how much we can fit into just 20 minutes!

To join The Arc Livestream Interviews, which are free, live & exclusive, simply click on the link below:

Who Else Is On Our List To Chat With???

- Michael Spiby: The man responsible for The Badloves, and one of Australia's best selling duo songs (with Jimmy Barnes), The Badloves have just released their new single...

- Nikki Nicholls:  Aside from her very successful solo career, Nikki became one of Australia’s top session singers providing her vocal ability to thousands of jingles for radio and television,  as well as contributing backing vocals to "Whispering Jack".  Nikki has toured with the likes of John Farnham, Susie Quatro, Australian Crawl, Kylie Minogue, just to name a few!

- Julian Matthews: One of the original members of The Stems, who's album "At First Sight" is still rated as one of the top 100 Indie Australian Albums of all time...

- Lisa Edwards:  One of the most acclaimed, recognised and awarded Australian Female Artists, including the South Australian Hall of Fame Award, Lisa might be best known as John Farnham's duet partner, but is still actively recording, with a new album due out soon...