(SOLD OUT) The Australian Tribute To Frankie Valli & The 4 Seasons VS. The Beach Boys Tribute Show

“The Australian Tribute To Frankie Valli & The 4 Seasons” and “The Beach Boys Tribute Show” go head-to-head in one HUGE SHOW (INCLUDING AWARD-WINNING DINNER)!

In 1963 “The Beach Boys” released “Surfers Rule”, a tongue-in-cheek- dig at their East Coast rivers, “Frankie Valli & The 4 Seasons”. (“Four Seasons, you better believe it!” They chanted, while Brian Wilson mimicked Valli’s wailing falsetto from “Walk Like A Man”)

“The 4 Seasons” then responded in kind with “No Surfin’ Today” a not-so-subtle dig at The Beach Boys!

From then on, it was ON!

A fierce rivalry grew between the East & West Coast factions fuelling each group to come up with better & better material, and WE (the world’s music lovers) are the ones that benefitted!

Over the ensuing decades, the music from these two great vocal groups became legend.

With the enormous success of the Broadway smash “The Jersey Boys” and the box-office hit move that followed, interest in Frankie Valli & The 4 Seasons has never been higher.

The Beach Boys were set to emulate that heightened popularity with the release of a movie blockbuster, “Love and Mercy”.

Now, you can decide for yourselves: who is the best vocal group of all time?

TICKETS: $59.50pp -INCLUDING AWARD-WINNING DINNER & SHOW from our menu.

CALL NOW TO BOOK: directly on 95511424 during normal business hours. 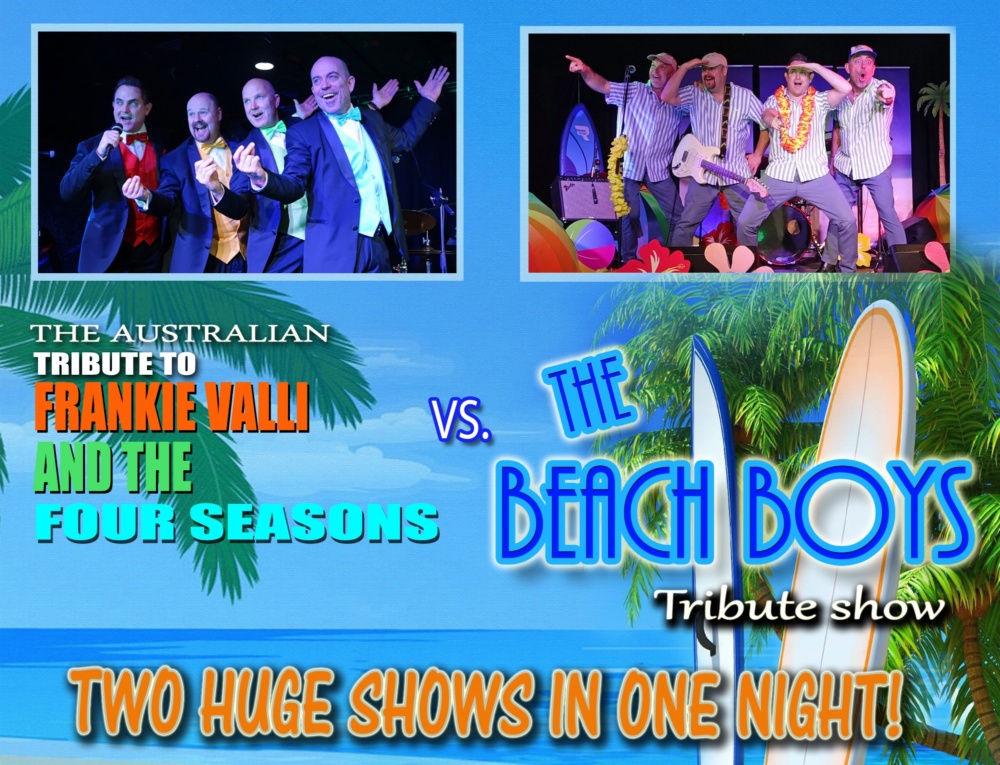 One full night jam-packed with classic hits! From “SURFIN USA” to “WALK LIKE A MAN”. From “GOOD VIBRATIONS” to “CAN’T TAKE MY EYES OFF YOU”.